What is a Daruma Doll?

Have you ever heard about the traditional Daruma doll from Japan? This adorable-looking figure has a deeper meaning, in that it aspires for perseverance and grants good fortune. Most foreigners are not even aware of its origins or what hides under its wacky appearance.

A Daruma doll is a traditional Japanese good luck charm that is used to help stay motivated on a goal. A Japanese legend states that the doll will lose its powers of good luck if it is not given a name. In order to start the ritual, first make a wish and paint one of Daruma's eyes black. When you've successfully completed your goal you will fill in the second eye signifying that you have completed your goal and helped the Daruma regain it’s vision.

For some people, there are two ways to use it. One way is by drawing one eye and setting a goal. Once the goal is completed, you draw in the other eye and start on the next task. The other way is to draw both eyes in before starting on your goal so that you don't forget what your end-goal was before you started working towards it. The Story of the First Daruma Doll

The Daruma doll is styled after Bodhidharma, a monk who's credited with founding Zen Buddhism. It seems he lived around between the 5th and 6th centuries CE. His origins are shrouded in mystery, and most of the accounts documenting his life are mixed with legends. Tracking Bodhidharma's journey from the “Western Regions" (possibly central Asia) is also pretty hard because we're not entirely sure how he got there.

During his travels he stopped for a time at a Shaolin Temple in China and became famous for founding the homonymous martial art; he continued to travel around before settling in a cave and meditating. In the same way, Buddha reached Enlightenment under the Bodhi Tree. These two are inspiring role models for all those who seek peace, although Bodhidharma’s story takes a darker turn.

The monk became a wall-gazer. He sat, eyes fixed on a wall, in an upright position for nine years, with no interruptions. This is excluding the single time that he closed his eyes seven years into the challenge. He had such a strong rage at himself for not having any discipline. that he cut his own eyelids off so as to prevent himself from ever sleeping again. As the lids touched the ground, there were turned into green tea plants that sprouted and began growing. This is said to be one of the reasons Buddhist monks often drink green tea to stay up longer.

On top of self-mutilation, Bodhidharma also suffered the loss of the use of his legs (according to some legends they fell off his body) as a result of spending nine years without moving. Many famous paintings and artworks of Bodhidharma depict him as a person with his arms crossed across his chest and wearing robes that fully cover the body. As such, the beloved Daruma doll also features the same appearance. The legend goes that Bodhidharma had a vision of a Chinese Emperor and Empress who were so impressed by his teachings that they promised to reward him with anything he desired. He requested one grain of rice grown in fertile soil each year, but the Emperor laughed at him and said it was too small an offer for so much teaching.

The only way he would get what he desired while meditating was if someone brought him food and water. So Bodhidharma made a doll and vowed that when the doll fell over from being knocked down, it would be a sign of good luck for the person who helped him out.

Bodhidharma's story is one of a great teacher who came to China to teach his wisdom. He was an expert in the practice of meditation.

Japan's Daruma Doll has a long history, dating back to the 17th century. Originally, the dolls were used as good luck charms. Nowadays, they are used as both good luck and motivational figures. 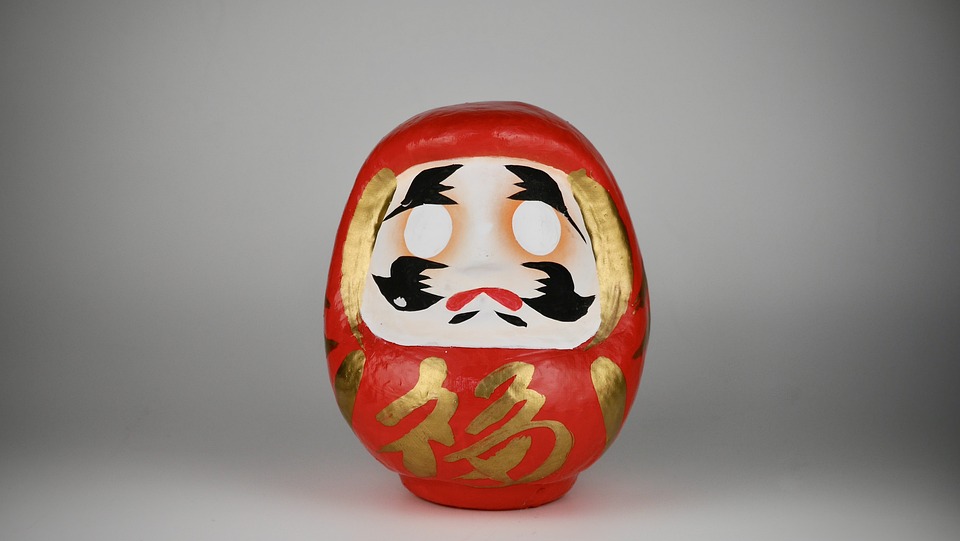 What is The Meaning of a Daruma Doll

The traditional Japanese Daruma dolls are red (but in modern times can come in a variety of colors) and round with facial hair and blank white eyes. People use them to focus on their goals by drawing in the eye sockets.

The purpose of this doll is to focus on achieving your goal by drawing in the eyes of the doll, which signifies starting your journey to accomplishing your goal.

The history of Daruma has run so deep in Japan there are even songs that almost all children in Japan will know!

Daruma Dolls and Happiness in "Gambaru" in Japanese Culture

Traditional Japanese culture has a belief that if one side of the doll is painted, then the other side is guaranteed to be painted in the future.

When it comes to happiness, Japanese culture believes that its up to oneself to find it. What matters is that you are persistent and don't give up when pursuing your goals. This idea can be seen in a practice called "Gambaru" which means “to continue on” in Japanese or is often translated commonly as well as “to do your best”. This word can apply both on an individual level and on a wider societal scale.

The Japanese culture is famous for their work ethic. This can be seen in their work life, but also becomes very clear when looking at the natural landscape of Japan. There are natural disasters yearly in Japan. From earthquakes to mudslides, flooding and tsunamis, snowstorms and heat waves. The people of Japan have been able to persist and overcome all of these obstacles with the mentality of "Ganbaru”. The Japanese are relentless in their pursuit for success and are admired for this dedication to hard work. 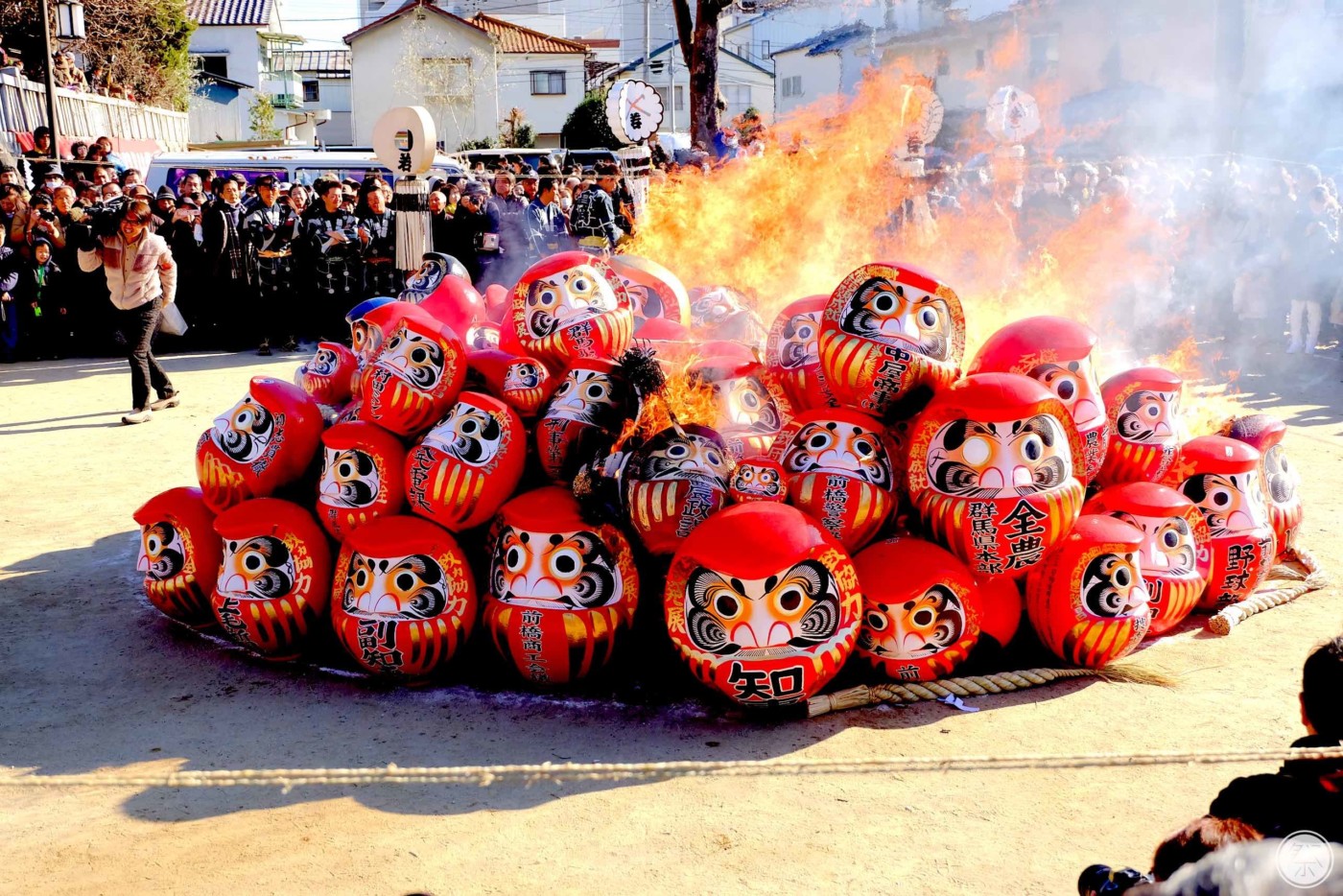 The Daruma Burning Festival is a Japanese tradition that dates back about 400 years. This festival celebrates the New Year by setting up an effigy of Daruma, a Buddhist monk who became famous for his resilience in the face of adversity. This effigy is burnt during the festival with all attendees taking turns striking it with a large hammer to make sure it burns. The Japanese believed that if they burned Daruma dolls, it would bring good luck. In the past, people would make and sell Daruma dolls to raise money for things like temples or shrines. But now, these dolls are displayed at stores during this time of the year to be burned as a way to celebrate past successes and future goals.

Here are a few Temples where you can join the Daruma burning festival!

Daruma Dolls for Your Business or Home Space 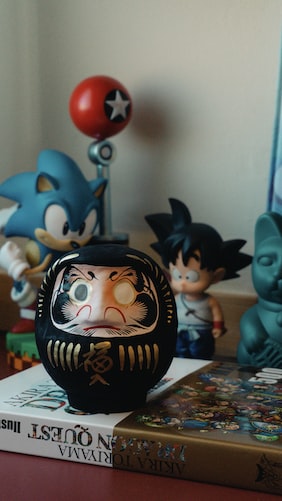 A Daruma doll is a round, hollow Japanese doll which can be filled with small amounts of sand or lead shot. The doll is designed to be wobbled from side to side until it falls over, at which point someone will have their wish fulfilled.

The Daruma Doll has been a symbol for good luck and fortune in Japan for centuries. It was believed that the person who first made the wish would get what they wanted by setting the goal and working hard towards it. If they didn't achieve their goal, then they could start again when they made a new wish with a new Daruma Doll.

The tradition has been passed down from generation to generation and still lives on today. You can now buy these dolls in different colors and sizes here in Japan or here from SpiritJapan.com. How To Grow Your Wisteria - From Seed To A Blossoming Tree The Most Beautiful Places in Kyoto – A Travel Guide for Everyone