The History of Onigiri for Delicious Japanese Cuisine

Onigiris are traditional Japanese fast food that's made of rice. The onigiri is then wrapped in seaweed and often filled with fish, meat, vegetables or anything else you might think of. Traditionally, the onigiri was carried by travelers as food that could be quickly eaten on the go.

In an 11th-century diary written by Murasaki Shikibu Nikki, there is mention of people eating rice balls. At that time, onigiri were not called onigiri, but tonjiki instead, and often eaten during outdoor picnic lunches. Most people attribute the origins of onigiri to the 17th century, when samurai soldiers would wrap balls of salty rice in bamboo sheaths in order to have a quick meal during battle. However, onigiri's roots can be traced back even further than the works of Lady Murasaki to around 700 AD! It may be difficult to picture, but before the use of chopsticks became widespread, in the Nara period, rice would commonly be rolled into small balls so that it could be easily picked up. In the Heian period, there was also a trend of rice being made into small rectangular shapes known at the time as tonjiki so that they could be easily stacked onto a plate and easily handled and eaten.The use of onigiris as a quick meal started in the Kamakura period to early Edo period. They were easy to prepare, requiring just an ample amount of cooked rice. This made sense because cooks didn't have to worry about serving and they could simply focus on the preparation of the food. Until the Genroku era in the mid-Edo period, Nori (dried seaweed) didn't become readily available. It was only when the farming and processing of Nori became commonplace that people were able to enjoy it in their everyday lives.

The onigiri is a traditional Japanese food made from white rice formed into triangle or oval shapes and filled with a savory or sweet filling. No one knows the exact origin of this dish but two popular theories are that it was an early form of “fast food” because it could be eaten without utensils and was packed with nutrients. It is believed to have originated in what is now known as Kyushu

There are many variations of this dish depending on how it is shaped and cooked which can include grilled onigiris, deep-fried ones, boiled ones and even flavored ones (such as teriyaki). The most typical type of onigiri is a rice triangle with some kind of delicious filling covered in nori. 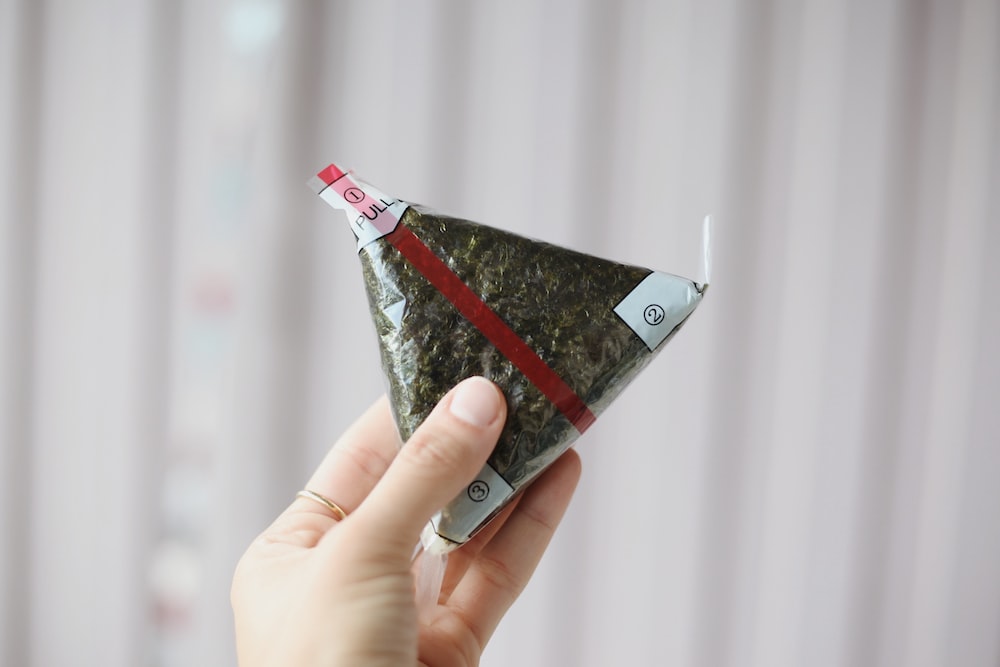 When making onigiri use freshly cooked rice that's cooled for a bit. This makes the onigiri easy to form and stick together without being too hot to handle.

You need to wet your hands with water to prevent the rice from sticking. Keep a bowl of clean, cold water next to you so you can prepare the rice properly.

Lightly rub salt across your hands and spread it evenly surface. This will help your onigiri stay soft and flavorful for a longer amount of time! While not necessary, this step can add some nice flavor.

The right pressure while making onigiri is important to make sure the rice doesn’t fall apart and isn’t too compressed. To form different shapes like triangles, balls, or cylinders it does take a little practice, but one day you can be like the masters and create a perfect light, but solid onigiri. It's best to go for a firmer touch.

5. Use Kitchen Towel to Save for Next Day

If you want to make onigiri for lunch the next day but don’t want to wake up early, here's a tip. Wrap the finished onigiri in plastic wrap and then again with a thick kitchen towel to protect them from being too cold in the fridge. By following these simple steps, your rice will stay cool&soft even in the fridge. No need to worry about your onigiri going bad or getting hard overnight.

To make onigiri you simply need to take cooked rice in your hand, create an indent where you can place your filling (tuna, seaweed, beef, anything you like). You then mold the rice around your filling and form a triangular shape before wrapping your newly prepared onigiri in nori.

What is the Difference Between Onigiris & Sushi?

Sushi is a Japanese dish consisting of vinegar-seasoned rice and other ingredients, such as seafood and vegetables. Sushi can be eaten as a whole, but we often dip it in soy sauce and wasabi.

Ongiri is a traditional Japanese snack food that consists of rice wrapped in nori (dried seaweed) and shaped into triangular or cone-shaped pieces. The rice can be seasoned with salt, sugar, or soy sauce before wrapping the nori around the rice to form the onigiri shape.

Onigiris are Japanese rice balls that are filled with various savory or sweet fillings, whereas sushi is a traditional Japanese dish consisting of cooked vinegared rice served with vegetables, raw fish, beef, egg or variety of other food items.

The onigiri, or rice ball, is a popular dish in Japan and other parts of East Asia. It is considered as a healthy food as it contains some key nutrients such as protein, B vitamins and minerals.

The onigiri's nutritional facts show that this dish is filled with protein and carbohydrates. The protein it contains can help people to build muscle mass and the carbohydrates will provide the energy required for physical activity.

Onigiri can be filled with different types of ingredients such as raw fish, vegetables and seaweed which provide more nutrients such as Omega-3 fatty acids, calcium and iron.

One of the biggest benefit of onigiri is that it is such a healthy “fast food” option. They are easy to eat, cheap to make, delicious, and they are not packed with sugars, fats, and other unnecessary preservatives like other types of meals on the go may have. Japanese Tatami Mats, the History of the Flooring Material of Noblemen; Why it's Making a Comeback in Modern Homes