Geishas are a traditional part of Japanese culture and have a long and interesting history.

The first geishas appeared in the 13th century and were originally men known as taikomochi. These men were entertainers who performed a variety of roles, including telling stories, cracking jokes, and providing music and dance. 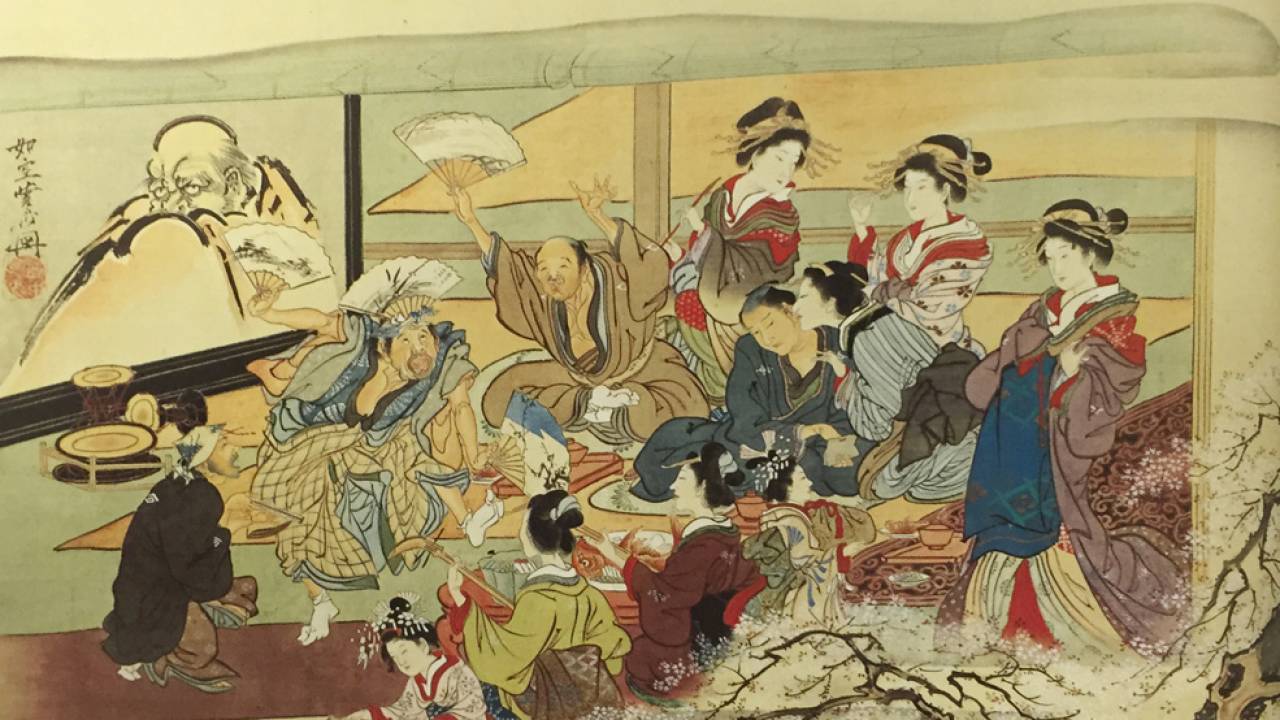 By the 16th century, geishas had evolved into more of a storytelling and humorous role, and by the 17th century, women began joining the ranks of geishas as well. By the 1750s, women geishas outnumbered the men. Geishas were originally assistants to oirans, which were high-class courtesans who lived in the pleasure quarters of Japanese cities during the Edo period (1603-1886).

In order to prevent geishas from forming personal relationships with customers, regulations were put in place. However, by the early 1800s, geishas began to replace oirans because they were cheaper and more accessible. In the 1920s, there were as many as 80,000 geishas in Japan.

Training to Become a Geisha

The training to become a geisha begins around the age of 14 or 15. These young apprentices are known as shikomisan and live in a lodge, or okiya, with their seniors. During their time in the okiya, shikomisan learn the proper etiquette, traditional arts of conversation and performance, and the proper way to wear a kimono. After one year of training, shikomisan take a shikomi exam before becoming maiko, which are apprentice geishas. After five years of training, maiko become full-fledged geishas through a ritual called erikae, which involves changing a red collar to a white one.

The Art of Geisha Makeup

One of the most distinctive aspects of a geisha is her makeup, which is complex and takes time to apply. The face and neck are covered in a white base powder called oshiroi.

Patterns, often in the shape of a W or V, are left unwhitened on the back of the neck to accentuate this area. 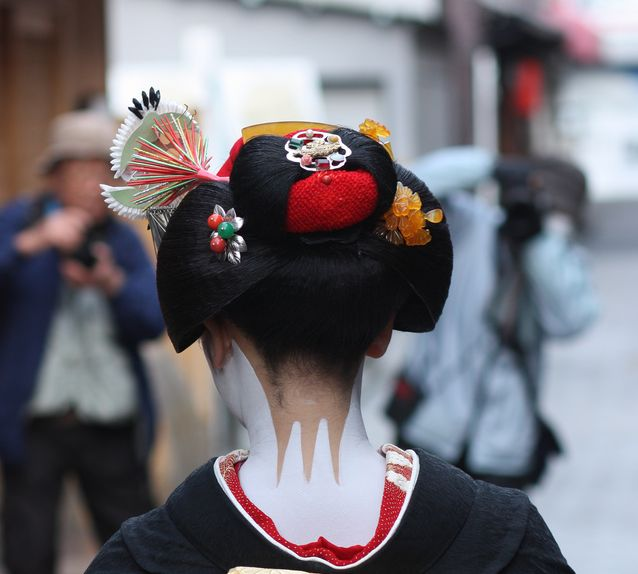 The eyebrows are colored black and maiko apply red makeup around their eyes.

They also draw a curved stripe on the bottom lip to create the illusion of a flower bud. After three years, a maiko will change her makeup to be more understated.

The Practice of Blackening Teeth in Geisha Culture

In traditional geisha culture, it was common for geishas to blacken their teeth as part of their appearance. This practice, known as ohaguro, was believed to be a symbol of beauty and refinement. It was also thought to protect the teeth from cavities and other oral health issues. 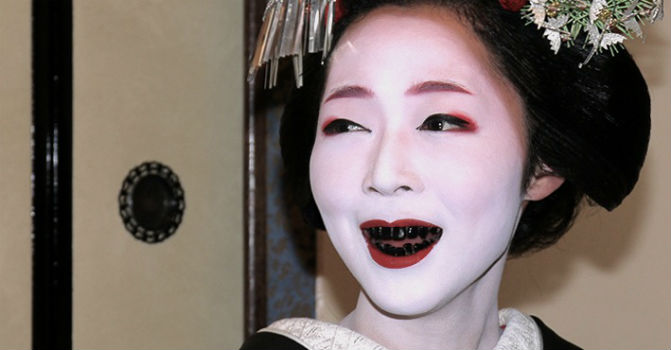 Ohaguro was typically done using a mixture of iron filings, gallnuts, and vinegar. The mixture was applied to the teeth using a brush or a small wooden stick and left on for several hours. Once the desired shade of black was achieved, the mixture would be removed and the teeth would be polished to a shine.

Ohaguro was a common practice among Japanese women, not just geishas, and was typically done in the early teenage years. It was considered a coming of age ritual and a sign of maturity. The practice of blackening teeth gradually declined in popularity over time and is now rare in modern Japan. 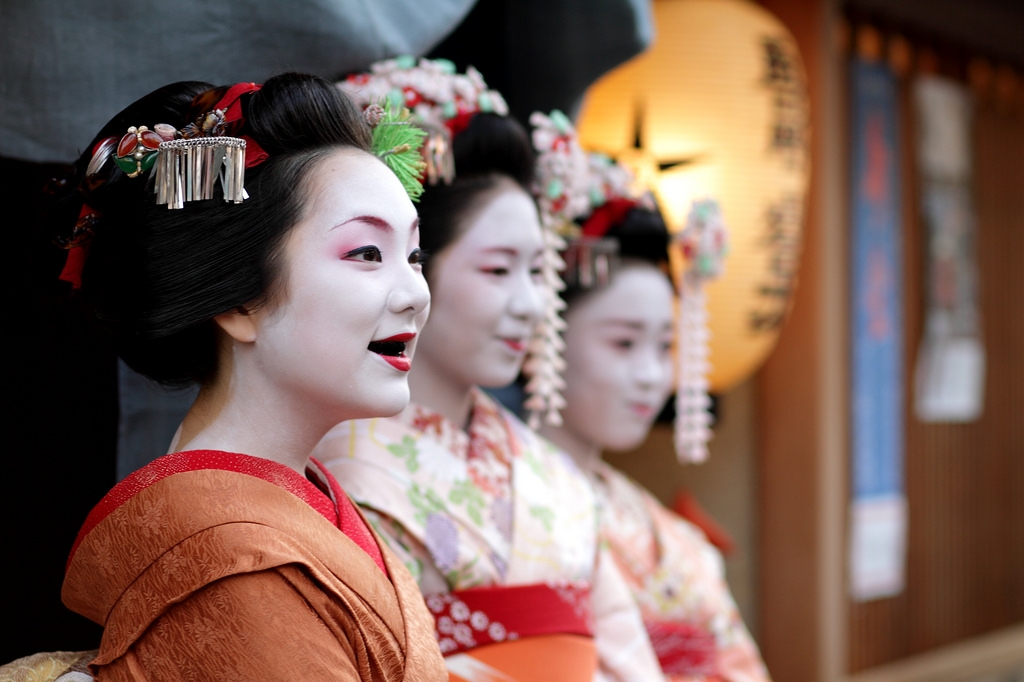 In recent years, some geishas have chosen to revive the practice of ohaguro as a way to honor and preserve traditional geisha culture. However, it is important to note that ohaguro is no longer a widespread or mandatory practice among geishas and is purely a personal choice.

The Intricate Hairstyles of Geishas While some geisha may use wigs, maiko must use their own hair and style it according to their level of experience. In fact, maiko cannot wash their hair for up to a week. The length and complexity of a geisha's hairstyle is often used to signify her level of experience – the longer and more elaborate the hair, the more experienced the geisha.

Geishas are artisans who dedicate their lives to perfecting their skills and entertaining customers. They are an important part of keeping traditional Japanese culture alive. Visitors to Japan can experience geishas performing traditional Japanese dance and music, or participate in tour packages like Ghibli tours and workshops, Fukushima tours, or Mount Fuji tours. Geishas also offer private tours in Tokyo and Kyoto, where visitors can sample the food and drinks unique to the region