There is more than one kind of Sakura- they aren't all the same. A number of people outside of Japan may have one specific image of the beautiful cherry blossoms in Japan, but the trees and flowers come in all different shapes, sizes and even colors.

While all the cherry trees do have some similarity, it's more obvious when you are in Japan that cherry blossoms can vary quite a bit. The scientific species for sakura is prunus. This is the same tree family that includes (among many others) the fruits plums, cherries, peaches, nectarines, apricots, and almonds. It’s hard to believe that sakura are in the same family as these other trees, especially since the fruit from sakura are so small and not eaten by humans.

As you grow more familiar with Japanese sakura trees, you'll notice that there's difference in color, shape and size of each plant. Most Japanese sakura blossoms are white or pale pink, but the shade can vary from lighter to darker shades of pink, a purple-ish hue and even yellow! Japan has more than 200 types of sakura blossoms but there are some you may be most familiar with. Check out some of our favorite varieties and try to spot them in the wild.

Check this out- more on these interesting sakura flowers! This is the most popular variety of cherry blossom and the one that probably matches your own image of sakura. You can find them all across Japan, with their first bloom starting as late as March around Kyushu and Shikoku, but blooming all over the country by April. We occasionally have them through May, especially when you head north or into a more mountainous area.

Single flowering, each flower has 5 petals either with a paler shade of pink or white. They are usually clustered together in bunches and will open before the leaves do.

When do cherry blossoms bloom in Japan?

It varies by species and location. Starting in the south and blooming later as you go north. If you wanted you could plan a whole trip to enjoy the sakura in full bloom for a month. Check out this Sakura Forecast to see when the sakura are expected to bloom in different locations at SpringSakura.com

Yamazakura (literally meaning mountain sakura) ranks 1st in the most commonly spotted wild sakura flowers. They're also called Hill Cherry and are often seen among the mountains where they grow in light pink, cherry-like petals in five-petal clusters. It can be nice to find them scattered across the mountains in a see of green, but if you want to get a full mountain of sakura, it is worth visiting Yoshino Yama in Nara! 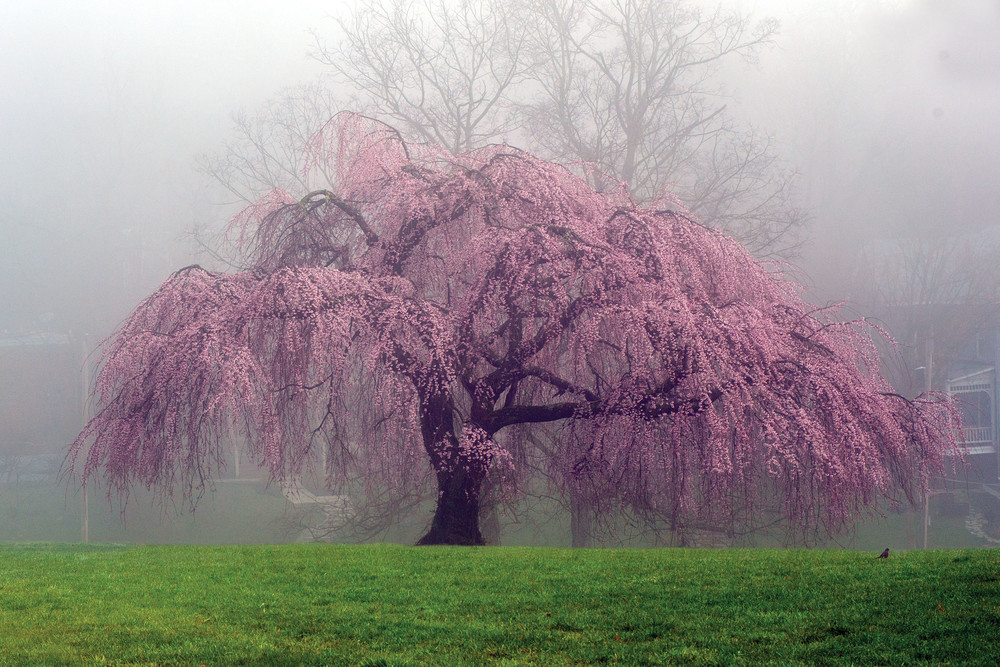 Shidarezakura is a personal favorite! This kind of cherry tree is literally known as a 'weeping' cherry tree and it's easy to see why. The blossoms hang down on long branches like an umbrella or parasol of flowers branches. They are the official flower of Kyoto prefecture and you can find some side streets in Kyoto city lined with them. Particularly near the Philosopher’s Path and Higashiyama.

These cherry blossoms bloom about a week before the Somei Yoshino, the most famous cherry tree is Miharu Takizakura in Fukushima. This cherry tree has been around for over 1,000 years and is considered one of Japan's five great cherry trees.

Bonus Fact: Some Japanese people believe that weeping trees such as Shidarezakura have ghosts living in them. With the dropping branches and flowers it is difficult to see inside and is the perfect place for spirits to hide. 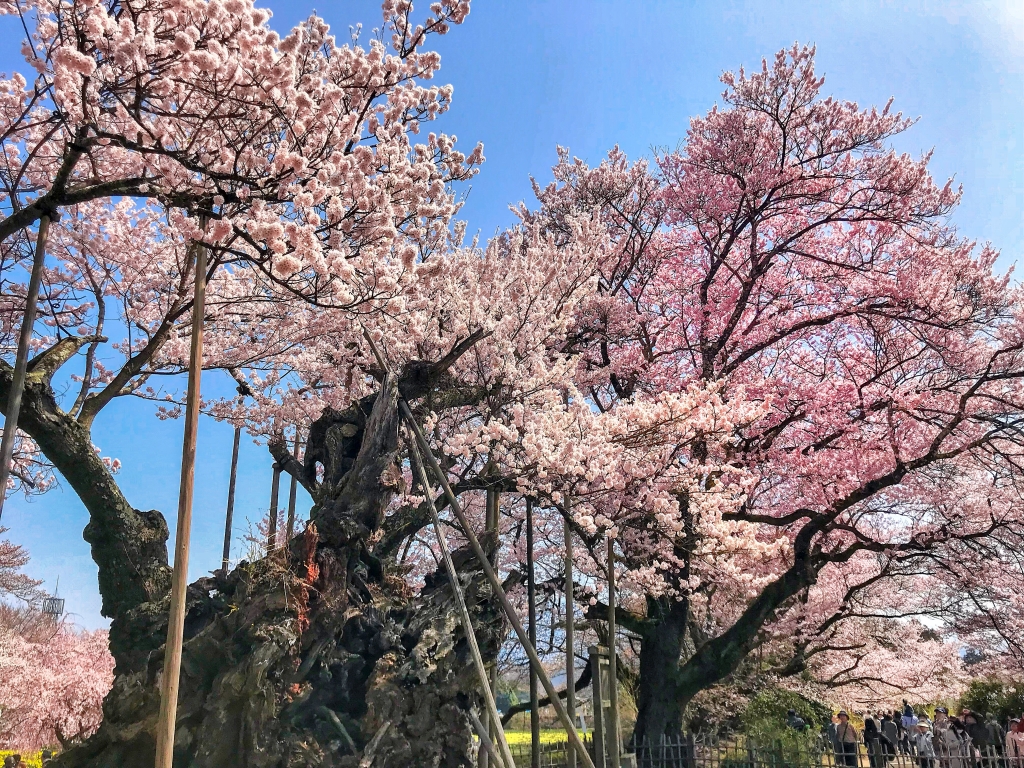 Edohigan are among the earliest blooming cherry blossoms. The name, which means "spring at the front of autumn," derives from their blooming coinciding with Western Japan's spring equinox. Their petals are light pink and they have a round shape that resembles a swollen calyx.

Japan's oldest and arguably most famous tree (Yamataka Jindai Sakura) is an Edohigan and it blooms between early to mid-April in Yamanashi prefecture. It is said to be over 2,000 years old! 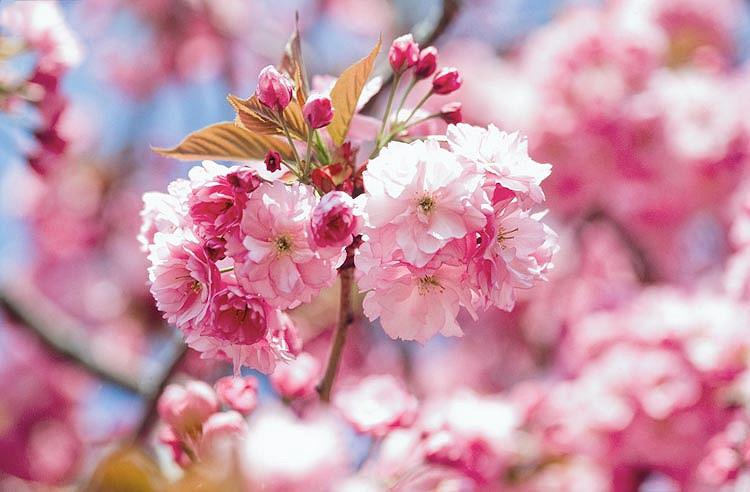 Here is where some sakura may look much different than you expect. Kanzan sakura are Yaezakura (double blossom) Sakura and have more than five petals per flower.

These gorgeous flowers have up to 50 petals and are by far one of the most later-blooming varieties. They're especially beautiful, with a deep pink color that stands out among others. You may even question if these are actually sakura as the bloom once the surrounding cherry blossoms have lost their flowers. 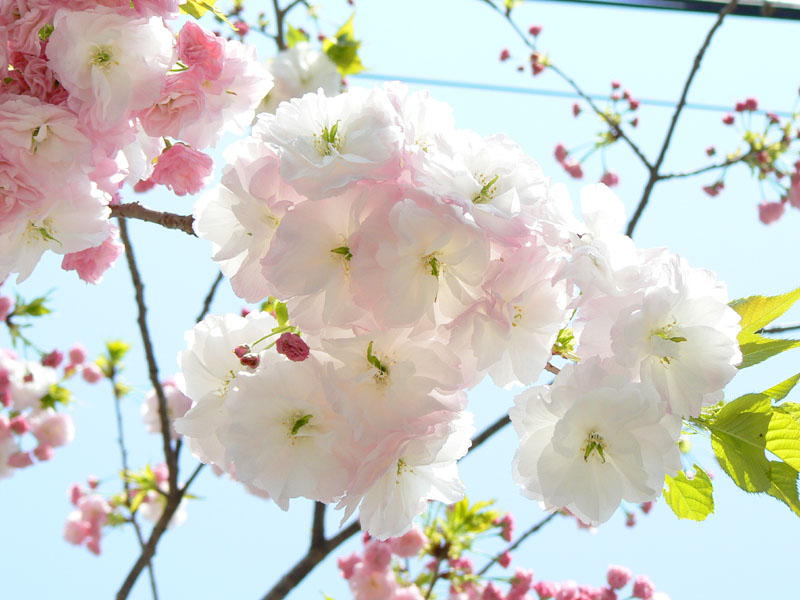 The Japanese word for 'Ichiyo' means 'one leaf.' When the 20-40 petals are fully open it reveals a single green “leaf” some people think looks like a small petal (called a pistil), which is why it's known as ichiyo. The flowers themselves are pale pink on the outside and white inside, but the leaves surrounding it are bright green.

Fun Sakura Fact: The sakura is a flower that is symbolic of the Japanese culture. It has a number of meanings, but most importantly, it symbolizes the beauty and fragility of life. Japanese cherry blossom trees have flowers in a range of colors and are indigenous to an area not limited to the mainland; the island of Okinawa is famous for its own type of sakura. Kanhizakura might not be the typical Sakura blossom, but the striking flower is celebrated in not only Japan's Ryukyu Islands, but in Vietnam, China, and Taiwan too. The Fuchsia flower is also called the Taiwan cherry and Bellflower cherry. 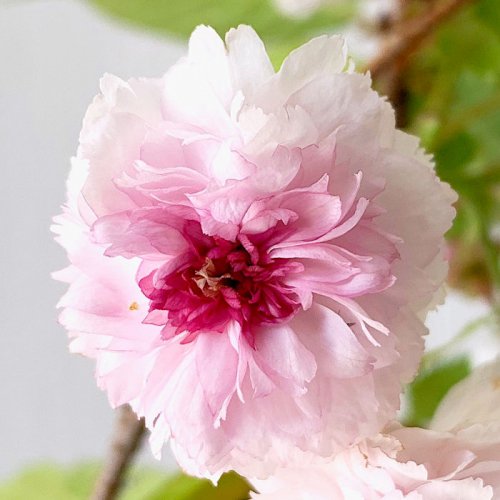 The name of this flower translates to "chrysanthemum cherry blossom" because it resembles Japan's famed Kiku (chrysanthemum) flower. Kikuzakura can be recognized by their pom-pom appearance and they easily stand out due to their large leaves. Each blossom has between 80 and 130 petals making the blossoms look like soft pink balls.

While the color of all sakura flowers typically falls somewhere in between white and pink, ukon sakura is the exception - with its yellow blossoms it is a pleasant surprise to see and admire. In Japanese, 'ukon' means turmeric which can be found in Indian curries and is also a popular cure for hangovers in Japan. This interesting name comes from the yellow color of the flowers resembling turmeric. This is a type of yaezakura (double-blossom) with 15 to 20 petals per flower. 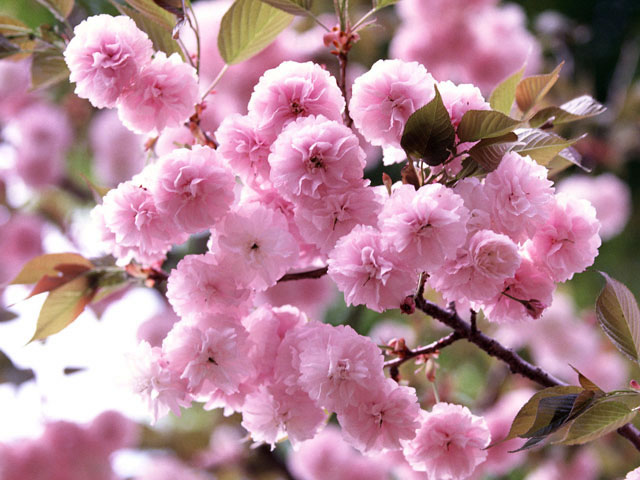 This sakura flower is known as "Fugenzou" translated to "Samantabhadra elephant" in English. It's a Bodhisattva often depicted on an elephant, seen in Buddhist art.

The people of the Muromachi Period- that's 1336- 1573 to you and me - believed the pistils of Fugenzou sakura to resemble an image. They are characterized by their incredible number of petals- sometimes up to 40 per blossom! The color is mainly pinky with a touch of red.

We want to thank the team at SpringSakura.com for sharing their love and knowledge of Japanese Cherry Blossoms with us!